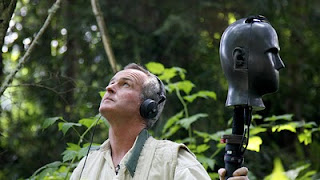 trailer & Hot Docs showtimes
Gordon Hempton collects sounds for a living. It's his passion, his calling. He's an Emmy Award-winning sound recordist who has spent the last 30 years gathering the sounds of nature before they disappear in the face of expanding civilization. He roams the U.S. in his microbus and scours forests wearing his sound recording kit. In this film, he doesn't so much record those sounds, but chases them like rare butterflies.

I have never seen a person react with such bliss upon hearing the sound of a whistling locomotive, or get so excited capturing the howls of coyotes at night. In contrast, the deadening hum of hydro poles grates him like fingernails on a chalkboard. Those hums represent the destructive expansion of humans. Little wonder, because Hempton was a botanist before he discovered his calling, one that may have cost him his marriage. He is an environmentalist, but in a class of his own.

Credit director Sherman for putting us in Hempton's shoes and forcing an audience watching a series of images to hear the world like Hempton does. There are no dead spots in this film. Sherman fills the frame with beautiful landscapes and haunting sounds. A film worth hearing as much as seeing.

For more Hot Docs reviews, visit REEL 'N' ROCK, or sign up as a Follower to this blog.
Posted by Allan Tong at 3:39 PM

Allan Tong
Toronto, Ontario, Canada
Allan is a Toronto filmmaker and business journalist. He's the co-director of the Sundance-funded documentary, THE FLYING STARS, and the director/writer of LITTLE MAO. Visit: http://allantong.blogspot.com/ Twitter: allan68